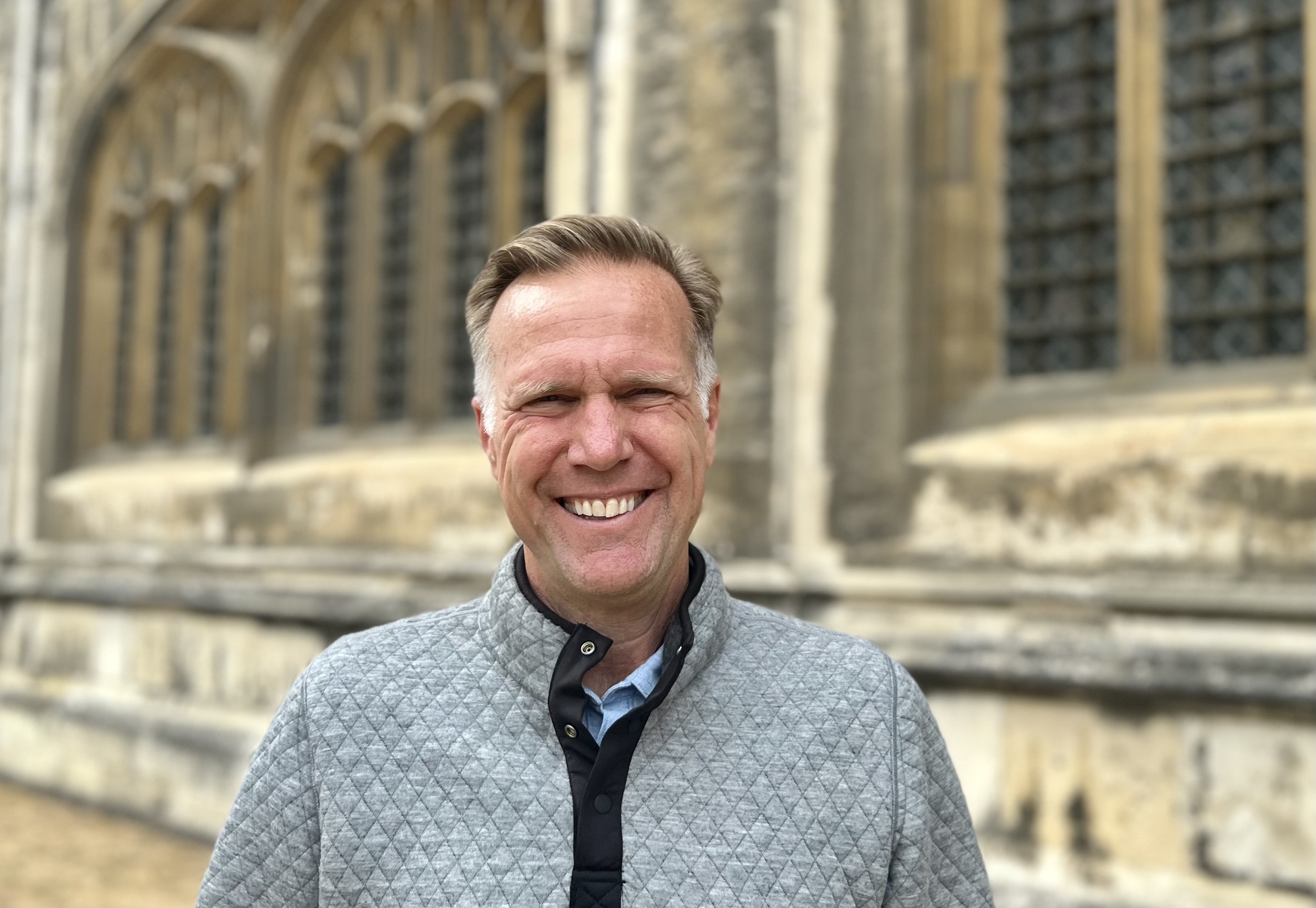 Last Lord’s Day, on a beautiful summer morning in Oxford, Hans and I walked to church. The location was about two miles from the hotel. Along the way there was much cause for inspiration. First, there was Merton College, where J.R.R. Tolkien taught for many years. Tolkien, of course, is the author of The Lord of the Rings and The Hobbit. Also along our route was the ancient Queens College, where John Owen (1616-1683) studied as a young man and earned his first two degrees in the early 1630’s. Owen was a leading light among seventeenth century English Puritans.

Next we walked through St. Mary’s Passage, a narrow walkway in which stands a conspicuous lamp post and an ornate door that many believe inspired a famous scene from CS Lewis’s children’s book, The Lion, the Witch, and the Wardrobe. Indeed, many believe that on a dark and snowy evening in Oxford, as Lewis made his way through the wintery campus, he came upon the gleaming lamp post in St Mary’s Passage, and imagined the scene where Lucy enters Narnia through the wardrobe and meets Mr. Tumnus the faun. The door adjacent to the lamp post, leading to Brasenose College, is adorned with two fauns on either side, and a lion carved into the middle. If you’ve read the Narnia tales, you’ll know that a lion is the leading figure.

Another landmark along the way is The Eagle and Child, the small pub where “The Inklings” met. This famous group of Oxford writers, including Lewis and Tolkien, would read portions of their writings to each another with pipes and pints in hand. O to be a fly on the wall during those discussions!

Finally we passed by the Martyrs Memorial, a deeply moving stone monument completed in 1843. The memorial was erected to honor the sacrifice of the Oxford Protestant Reformers who were executed during the wicked reign of the Roman Catholic Queen, Mary Tudor (i.e. Bloody Mary). Thankfully, Queen Mary’s reign of terror only lasted a few years (1553-1558). The large memorial stands nearby where Nicholas Ridley, Hugh Latimer, and Thomas Cranmer were burned at the stake on October 16th, 1555. The inscription on the memorial reads:

To the Glory of God, and in grateful commemoration of His servants, Thomas Cranmer, Nicholas Ridley, Hugh Latimer, Prelates of the Church of England who near this spot yielded their bodies to be burned, bearing witness to the sacred truths which they had affirmed and maintained against the errors of the Church of Rome, and rejoicing that to them it was given not only to believe in Christ, but also to suffer for His sake; this monument was erected by public subscription in the year of our Lord God, MDCCCXLI [1841].

Oxford is dripping with rich Christian history. It is heartbreaking, however, that so little biblical Christianity is believed and practiced there today. Oxford is the city of spires, but those spires testify to a bygone Christian Era in England, not a present one. The same is true for London, Cambridge, and Edinburgh, the other three cities that we visited on our trip. Some classify Britain, indeed all of western Europe, as a collection of unreached peoples. They are probably right. Only a tiny percentage of europeans profess faith in Christ, and are members of biblical churches. The number of Reformed and confessional believers and churches in the British Isles and the European Continent is minuscule.

The British Isles need a modern Reformation. They need to be reintroduced to the Christian Gospel that they believed for centuries, but have now spurned and/or forgotten. They need a new generation of preachers who will unashamedly and unapologetically preach the good news of salvation by grace, through faith, in Jesus Christ — the good news that Cranmer, Knox, Owen, Watson, and Lewis courageously trumpeted to their own generation.

Christ Church Family, I am grateful to report to you that God has raised up godly and faithful  ministers in Cambridge and Oxford. It was a joy to spend time with them last week, and to hear how God is at work in their respective churches. Rev. Douglas McCallum is the pastor of Cambridge Presbyterian Church. He is a faithful preacher, a loving shepherd, and possesses a heart for the lost. Rev. Andy Young is the pastor of Oxford Evangelical Presbyterian Church. He too is a faithful preacher and loving shepherd, with a desire to reach unbelievers in his lively university context. Both congregations are a bright light in the darkness. Both churches need a permanent and suitable building. Please pray for them in this area of need.

When Hans and I arrived to the Oxford church thirty minutes before the morning service, Rev. Young and his four daughters were setting up chairs and sound equipment. They meet at St. Luke’s Chapel in the morning, and another nearby location in the evening. Sound familiar? The church plant has been meeting for four years and is presently experiencing some marvelous growth. PTL! I had the privilege of bringing warm greetings from Christ Church Presbyterian, and encouraging the flock through the preaching of God’s Word in both morning and evening worship services. Between services we attended a church picnic at University Park. It was a blessing to join their sweet fellowship, meet several post-graduate students, and to see all of the children in the service and running around the park. It very much reminded me of Christ Church.

Beloved members and friends of Christ Church, the Lord has blessed our congregation tremendously over the past nine years. He has done great things! My time on this ministry trip has deepened my gratitude for what He’s done for us. He has grown and matured us through His divinely instituted means of grace. Through those means He’s fostered Christ-centered unity in our flock. In addition, by His Spirit and Word, God has cultivated in our congregation a heart for our lost neighbors. He has given us a wonderful facility. He has raised up seventeen godly ruling elders and deacons to serve our congregation. He has given us a strong ministry to students and young professionals through Pastors Hodges and Bauer. He has provided us with Miss Rachael McIntosh, an excellent addition to our staff. I could go on. We have so many reasons to be thankful, and to praise our blessed triune God’s holy name.

But we must not become complacent. We must not forget the countless souls who still need Jesus in our own community, and around the world. Let us remain on our knees for the salvation of the lost in the historic cities of Charleston, Oxford, Cambridge, and Edinburgh. Let us also pray for the faithful preaching of the gospel and the conversion of souls in Heidelberg, Germany, through the ministry of our dear brother Rev. Sebastian Heck. Let’s seek to encourage Sebastian during his few weeks with us this summer at Christ Church. Above all, let us abide in the person and finished work of Christ. His Word is our lamp post of truth. His life, death, and resurrection are our life and salvation. Soli Deo Gloria!

More in News and Events

His Grace Is Sufficient

His Grace Is Sufficient | Letter From Pastor Jon

Pastoral Letter | Be Strong in the Lord

INVEST IN THE FUTURE OF CCP

The Way of Life | Session Four

The Way of Life

The Nuts and Bolts of Sanctification, Part I

The Nuts and Bolts of Sanctification, Part II

The Nuts and Bolts of Sanctification, Part III

How Do I Teach My Family?

A Confessional Approach to Preaching

What is a Man of God?

Misplaced Humility & the Resurrection of the Dead

The Gift of Encouragement

From Heaven on High I Come to You

Listening to the Word of Christ

A Celebration of God's Faithfulness

Listening to the Word of Christ

Born That Man No More May Die

Words Matter: Godly Speech in a Culture of Profanity

He Descended Into Hell

Worship & the Means of Grace

Foundations of a Welcoming Church

The Cross: A Magnification of God’s Love

The Role of Heroes

Praying for a New Reformation in Germany

The Love of God

Walking with God, Part I

A Savior Is Born

Missions & Church Planting in the UK

Fighting For the Truth

In the Spiritual Ditch?

The Public Reading of Scripture

Clemson & the Love of God

Press On, Christ Church, Press On!

The Intentional Christian Marriage, Part I

The Wonderful Gospel of Grace

A Wrangle on Sanctification

Tithes and Offerings: An Act of Worship

The Power of Words