In the early part of 2012, Rev. Jon D. Payne was encouraged by a fellow minister from South Carolina to consider planting a new and distinctively Reformed and Presbyterian church in the vibrant and growing city/area of Charleston. After much counsel, numerous answered prayers, and the hearty approval of the Palmetto Presbytery, Rev. Payne responded to God’s call. He left Grace Presbyterian Church in Douglasville, Georgia, where he served as senior minister from 2003-2013, and moved his family to Charleston in order to help establish a new congregation of the Presbyterian Church in America (PCA).

On March 25th, 2013, the first informational meeting for Christ Church was held at the historic South Carolina Society Hall in downtown Charleston. About seventy-five people from the Charleston area gathered to hear about the new church plant. The meeting was opened in prayer by Rev. Richard D. Phillips, senior minister at Second Presbyterian Church, Greenville, SC, and Rev. Payne briefly shared the Reformed and confessional commitments of the new work.

After several beneficial meetings with both the Palmetto Presbytery’s MNA Church Planting Committee and Credentials Committee, Rev. Payne’s call to begin a mission church in the Charleston area was unanimously approved at the presbytery’s spring meeting on April 25th, 2013 in Dillon, South Carolina.

The historic First Scots Presbyterian Church (53 Meeting Street, downtown Charleston) graciously allowed Christ Church to meet in their beautiful chapel for evening worship during the summer months. Our first Lord’s Day worship service was on June 9th, 2013, at 6:00 p.m. There were about 170 in attendance (many from supporting churches), with about two dozen turned away due to space limitations. Rev. Payne opened his series on “The Twelve Foundations of a Healthy Church” by preaching from John 3:16. Rev. Richard D. Phillips and Mr. Ross Hodges assisted in the service.

After meeting for the summer at First Scots, Christ Church began to worship on Lord’s Day evenings at St. Johannes Lutheran Church at 48 Hasell Street, also in downtown Charleston. With a growing congregation, however, it was becoming evident that it was time to begin meeting for both morning and evening worship on the Lord’s Day. After several weeks of searching for a suitable and affordable location to worship in downtown Charleston, the leadership made the decision to rent space at Moultrie Middle School near the Old Village in Mount Pleasant. It is conveniently located only a few miles from downtown.

Christ Church began morning and evening worship services at Moultrie Middle School on November 3, 2013. Two weeks later, on November 17, we received our first group of new members. There are currently about 190 members, with an average weekly morning attendence of 210, and an average evening attendance of 80.

In June 2018 we celebrated God's faithfulness in our five year anniversary. Christ Church continues to search diligently for a long-term, suitable facility.

The Lord is faithful, and He will continue to build his church through his means for his everlasting glory. 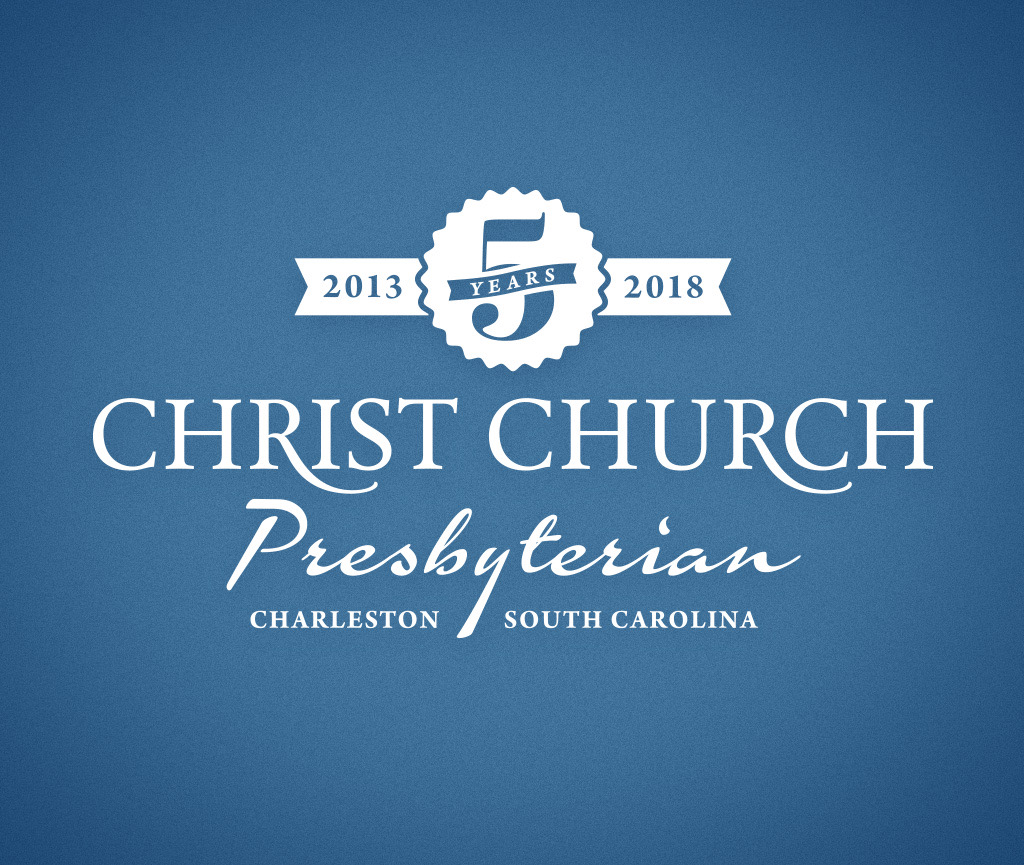 For as the rain and the snow come down from heaven and do not return there but water the earth, making it bring forth and sprout, giving seed to the sower and bread to the eater, so shall my Word be that goes out from my mouth; It shall not return to me empty, but it shall accomplish that which I purpose, and shall succeed in the thing for which I sent it.
- Isaiah 55:10-11

And the Word of God continued to increase, and the
number of the disciples multiplied greatly ...
- Acts 6:7a